We especially need imagination in science. It is not all mathematics, nor all logic, but it is somewhat beauty and poetry. 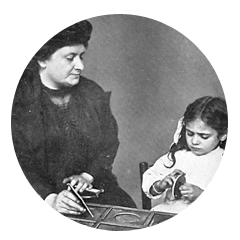 Mathematics is that phenomenon that attracts children from very young age. The science of number is a similar product of human intellect as language. Mathematics is an integral part of anyone's life, as the numbers are defined and understood with experience and age, especially experiences with real objects. Even though they become abstract ideas as we grow up, no physical aspects of objects can suggest the idea of numbers. The human achievements has scaled over surmountable complications, from the ability to count and compute to use numerical relationships in day-to-day lives and to solve complex matters. Mathematics is around a child right from day he/ she is born.

The Montessori mathematics curriculum is designed to support a child's natural interest in mathematics and it provides a strong foundation in numbers with the use of specially designed mathematics materials. The concept of number is not a contribution of a single individual but it is the product of gradual and social evolution. The number system is an abstract invention that is created thousands of years ago. Through concrete mathematical experiences, children start to learn about dimensions, size, numbers, shape and sequences and then with the use of abstract materials, they can make the transition from concrete experiences to paper-and-pencil exercises. The number system's realization began with one and then one more than one, and so on.

The Montessori mathematical program is divided into several parts to facilitate a gradual progress in a child's mind to understand mathematical concepts, which begins at simplest and follows to complex problems for better exercise of the mind. Mathematics is a part o the nature of humans as it arises from the human mind and comes in contact with the world and contemplates the universe and factors such as time and space. Arithmetic deals with shape, numbers, space and their relationships by the use of numbers and symbols. Being one of the main branches of mathematics, it teaches the science of pattern, and it includes patterns of all kinds from numerical patters to abstract patters and patterns of shape and motion.

In Montessori classroom, children are introduced to different branches of mathematics such as arithmetic, geometry, statistics and calculus. Informal activities such as games, mathematical concepts such as seriation, one-to-one correspondence and sorting are taught and instilled into the minds of children. Precisely concepts such as decimal system, arithmetic tables, whole numbers and fractions and positive numbers; this way a child is introduced to mathematics through preliminary mathematical activities and concepts.

Purpose of Mathematics in Montessori

The young children observe and experience the world sensorial. From experiences such as these, the child abstract concepts and qualities of the things in the nature. Concepts such as these allow the child to create a mental order as the child establishes a mental map that supports adaptation to the environment and the changes which may occur in it. Maria Montessori took the idea from French philosopher Pascal that the humans have a mathematical mind. She also said that a mathematical mind was a sort of mind which is built up with the state of being exact. She knew that the mathematical mind tends to estimate and it needs to quantify, to see identity and similarity, difference and patterns and to make order and sequence and to control error.

The Montessori materials help children to construct precise order. Clear, precise and abstract ideas are used for thinking and the children's growing knowledge of the surroundings makes it possible for them to have a sense of positioning in the nature. In classrooms, children are offered materials and experiences to help them build internal orders that stabilize their thought process as they age. The sensorial mathematical material is exact. The activities require precision so that the children can come into contact with the isolated concepts and through repetitive practices, draw from the essence of each practice to have a clearer abstraction.

As spoken language is used to express abstract concepts and to communicate with others, quantitative experience communication also needs a language and thus came the language of mathematics. By age four, children are ready for mathematics, a sort of preparations are made in order to introduce them to the language of mathematics. In the beginning children are to establish internal order, then they will have developed precise movement. Following, they will have established the work habit and they are able to follow and complete a work cycle. At this point, they can concentrate, and slowly and steadily they learned to follow a process. They can use symbols and numbers with as much ease now as they can communicate.

Arithmetic is the science of computing using numbers. It focuses on the important concepts of addition, subtraction, multiplication and division. The study of mathematics is more than acquiring mathematical skills, it is the study of patterns, structure and relationships. It is the ultimate abstraction of rules governing interactions are the objects of study. Maria Montessori stated that the it is the mind's power of abstraction that with imagination, goes beyond the simple perception of things, so that the two powers play a mutual part in the construction of the mind's content. The mathematical mind is vital as it allows the child to keep order and thus understand his/ her world. Because of the ordered and logical nature of mathematics, the child learns to understand intellectual training for precise and rigorous thought along with development of a mathematical mind. By age four, children are able to classify experiences, have clear perception and the ability to classify leads to precise conclusions.